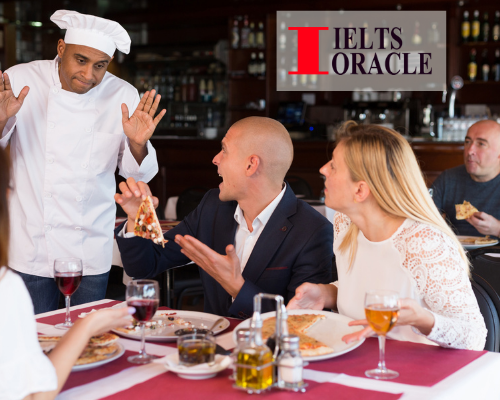 Talk about a time when you received bad customer service at a restaurant.

Providing spellbound hospitality is in the Indian blood as Indians are known for the same. I must admit that in every nook and corner of India one can find an overwhelmed welcome and conviviality.

Contrastingly, I would say that once I experienced pathetic services provided by an extremely prestigious chain restaurant of my town and that was the Galaxy. Actually, that was the time of my dearest friend’s engagement ceremony when I visited the restaurant’s banquet hall with my family. Undoubtedly it was a sumptuous event amid spectacular garland decoration and scrumptious food and beverages, I felt a bit neglected when the time of supper arose. Actually, after having delectable snacks we headed towards the buffet and we saw that various cuisines were lying there like Indian, Continental, Chinese, Thai and even Pakistani but as I was fond of Indian food I turned toward it and started pouring it in my plate but when I started eating it, it was cold as ice. I called a steward and asked him that the food was cold, kindly reheat it and serve it, he apologised and took my plate, however, he did not come back even after half an hour and it seemed like he turned me a deaf ear and commenced serving other guests. I called him repeatedly but he was not listening. At the end, I took another plate and started filling it with food but again, suddenly, I observed the same thing, then I called there manager and uttered the whole thing and even complained about their waiter and his service, he felt guilty and apologetically replace the food and and this time he took a great care.

All in all, this was a time when a highly prestigious restaurant did something really unwelcomed. Though the fault was only their waiter’s but when it comes on ratings and feedback, the whole personnel gets covered and the guests give their feedback accordingly.