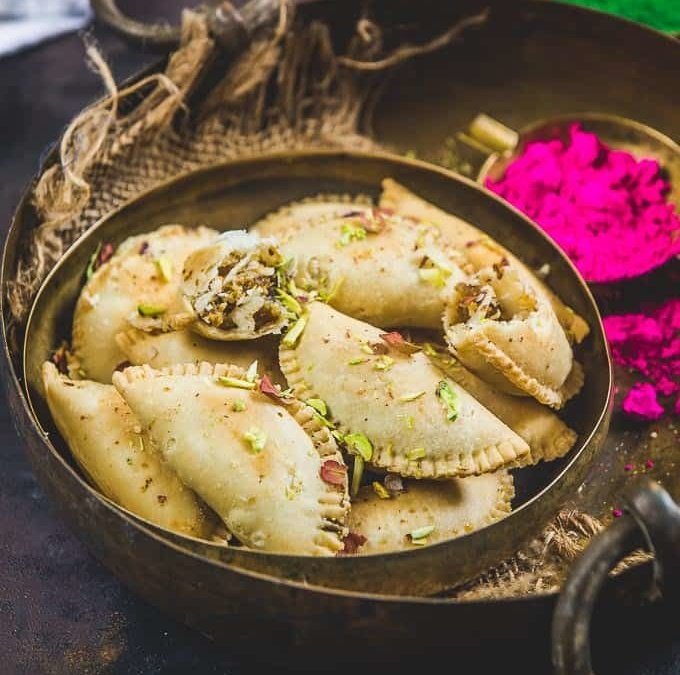 I am a fussy eater and I like to eat what I like the most. Although plenty of inventions and discoveries were made in every walk of life since ancient times, the taste and ways of cooking have changed with the lapse of time. However, I am fond of food items which are made on only some particular occasions and there are lots of food items cooked on special events. Many of them are associated with festivals and are available at some specific times of the year.

One such food item is “Gujiya”, which is generally prepared at the time of Holi festival. Holi is the festival of colors which falls in the month of March. It has its roots in an old myth where a boy, who is a believer of God, was saved from the raging fire while the evil person got burned into ashes. It is a symbol of victory of good over evil. So to celebrate it people make lots of sweets and dishes.

Gujiya is a famous Indian food which is made up of white flour and with the stuffing of khoya and dry fruits. Initially, the outer pastry is made of white flour, and then it is placed on the mold and stuffing is filled. Further, it is molded into a semicircular stuffed pastry, it is very important that the gujiya is pressed properly and sealed well. It is then baked or fried till its outer layer turns golden and crispy. It is then taken out of the oil and dried.

It is mostly sweet in taste and generally served plain to family and guests. People of all age enjoy having it, especially children. It is one of my favorite sweets since I was in first grade, for me it is like Holi is incomplete without gujiya.