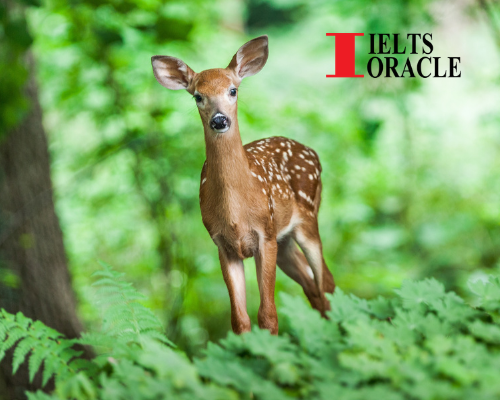 Describe a time when you were really close to a wild animal.

Flora and fauna of planet earth is just commendable. The chirping of birds in the morning, the dancing of the peacock, those beautiful snowy white rabbits enjoying their carrots in the farms and many more just keeps us open-mouthed sometimes.

In this regard, I would like to share my experience with a musk deer which does not belong to a true deer family. Unlike others, it is without antlers and facial glands and of particular economic importance to humans—a musk gland which is specifically found in male deers which has a special odour.

Actually, a few years back I went to Manali with my family for a vacation when I witnessed this particular creature. We were sitting and having some rest after a long journey, munching some snacks and having a good time together in an open space where all of a sudden we started inhaling a weird fragrance. At the same time my sister saw this mammal and alerted us because this animal is a shy one and prefers to go solitary. It was just roaming around, grazing some grass, leaves and flowers when we relished watching this nocturnal creature as it is implausible during dawn. We were getting astonished by its mesmerising aura and I observed that it was very unique on its own possessing stocky build and hind legs longer than their front legs also having enlarged upper canines. When I browsed about him, I found that Musk deers are herbivores, living in hilly, forested environments, generally far from human habitation. Female musk deer give birth to a single fawn after about 150–180 days. The newborn young are very small, and essentially motionless for the first month of their lives, a feature that helps them remain hidden from predators.

These days they have been hunting for their scent glands which are used in perfumes and this is why they are on the verge of extinction.

Nevertheless, it was a great moment of our lives that we enjoyed watching a musk deer live and that too from such a short distance. ​