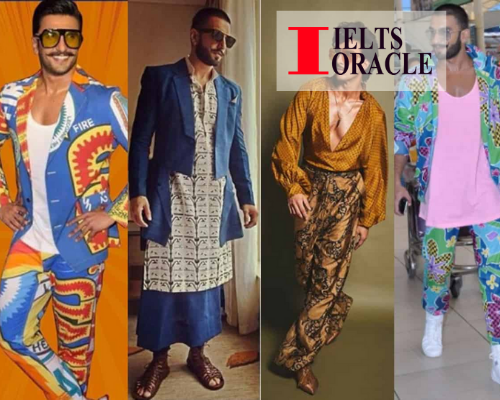 It is a common belief that a book is judged by its cover, however I opine that a person’s personality should be examined by its soul. I don’t believe in being judgemental but yes sometimes it feels like the outer personality of a person plays a vital role in spreading its aura.

As such I have observed very few people who possesses a bizarre dressing sense but one such personality is there who stays in the limelight every now and then just because of his clothing style and that is none other then the renowned face of Indian film industry Mr. Ranveer Singh who is there in the film fraternity since last decade.

The recipient of several awards, is the highest paid Indian actor, despite that, he wears anything. Ranveer Singh is known for his high energy and power-packed performances as much for his quirky sense of fashion. The actor never shies away from experimenting with his wardrobe. He recently posted on his Instagram sharing a picture where he has collaged all of his images in different attires of different colours and created a shade card of sorts. Ranveer recently took yet another opportunity to show off his crazy side  where he can be seen donning a multi-coloured printed attire and his funky shades and white sneakers complimented his overall look.

In a nutshell, I would say that he is the one who catches my attention every time I see him on social media as I follow him or  in the award shows or even in any print media.