Describe a film/movie that made you laugh 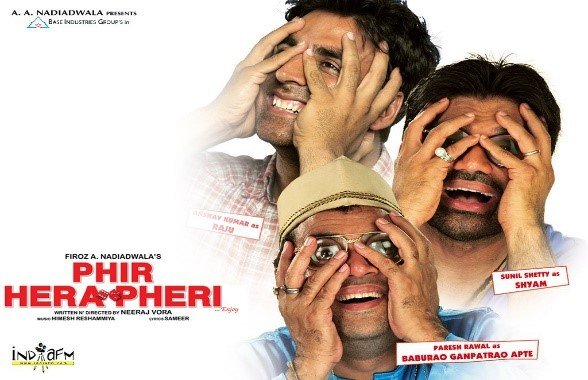 Describe a film/movie that made you laugh.

Movies are considered as the best stress-buster, helping people to escape from their own lives and problems for a short time. There are different genres of movies, among which comedy, thrillers, and sci-fi are catching everyone’s attention nowadays, to which I am no exception. I am a huge movie fanatic and never miss any opportunity to watch good ones. Among all, I have watched till date, the most hilarious is “Phir Hera Pheri”.

A couple of weeks ago, on the occasion of my father’s 60th birthday, I thought of giving all of us some quality time by watching a comedy film together. My father loves watching movies since his childhood to that extent that he sometimes used to miss his schools to watch the newly released hits of his time. Owing to his immense interest, he has equipped our home with a home theatre.

I searched the internet for some recommendations as I knew that it would be better if I could come up with something of my father’s time and choice. Finally, I decorated the room after selecting this one. It was not a surprise for my father only, but for the entire family too. Ultimately, it was loved by all.

Coming on to the movie, there are myriad reasons why it is an enjoyable one. To start with, this is an epic with numerous rib-tickling moments which make one laugh until his sides ache. Moreover, the comic timing and dialogue-delivery both are astounding and outstanding. On top of that, all the three lead actors – Akshay Kumar, Sunil Shetty and Paresh Rawal – are at their best with commendable acting skills. The whole story revolves around these three, who because of the greed of doubling their money get trapped and land in serious troubles. All these positives make it a must watch and not to forget mentioning that the most adorable character is Babbu Bhaiya, who actually make this movie a treat to watch.

At the end I would say, to escape out the stress, workload and depressions of the modern lifestyle, cinema therapy is really beneficial as it not only is entertaining, but sometime changes our perspective to deal with our problems efficaciously.